In this article we will present estimates results of some fundamental variables for a large sample of countries which represented, in terms of GDP, a range of 85%-95% of the whole countries measured each year by the Penn World Table 8.0 for more than fifty years.[1]

Our main purpose is to establish a broad global check of some Marxian hypothesis related to the increase in labor productivity and capital per worker, and the reduction in the output-capital ratio in current terms.

In present days a growing number of databases makes possible to start, at least as a first approximation, the study of economic aspects on a real world scale aiming to capture some systemic trends which previously have been mostly ignored or just tacitly assumed on the weak base of some particular country – typically, United States – that would automatically represent the totality of the world system.

Despite the limitations of some data available in the Penn World Table, the main conclusion of the present paper is that it seems to be a confirmation of those hypotheses.

In the next sections we will present the results for these proxies to some Marxian variables. Having stated that there is a unity in the laws of value, accumulation and the tendency of the rate of profit to fall, the first section will include scatter plots to graph the conceptual and empirical unity of the variables (2888 pairs of data for each graph). In the second section we will see time series for the world averages of the variables, while in the third we will show a particular analysis of the maximum rate of profit considering particular regional influences. In the end methodological and statistical annexes are included.

According to Marx, the source of value as social necessary labor time is the labor force. In competition capitalists, aiming to augment productivity and reduce the value of commodities, increase their relative investment in means of production compared to living labor or labor force. 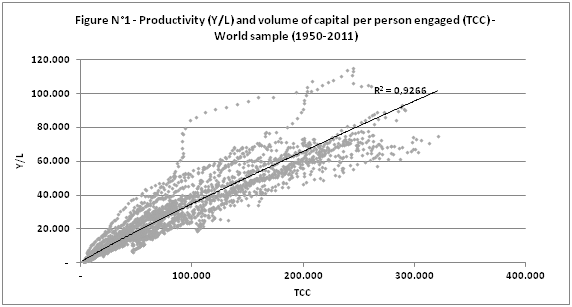 Inasmuch as living labor is the only source of value (including surplus value –the share of value added that capitalist obtains after commodities are finally sold-), such trend in the technical composition of capital raises questions on the long run success of the mode of production. However, the value of both the means of production and the labor force (or the value added by the latter), may show a different path. The expression in value terms of this technical composition – the value composition of capital – could be different as a larger relative cheapening of constant capital could modify to some degree the relation, measured in value or price terms, between means of production, or dead labor, and labor force, or living labor (K/Y).

Considering the rate of profit (ROP) as profits (P) divided by fixed capital (K), we can express the rate, dividing both numerator and denominator by value added, as a compound result of the share of profits in value added (P/Y) and the value composition of capital (K/Y):

The share of profits expands as the value of the labor force is reduced in relative terms by mechanization, a larger investment in fixed capital. Because of this, the relative increase in surplus value requires intensify technological change, to raise the organic composition, it´s considered by Marx as part of the LTRPF as such.[2]  But additionally the surplus value rate may be augmented by other means that explicitly leaves aside mechanization and that Marx considered as “countervailing factors” of the law like the depression of wages below the value of labor force (increasing surplus value rate by reducing the means of consumption which form the workers fund of consumption) or the increasing intensity of exploitation (for example including the entry in labor markets of more family members for a same or higher, but relative lower, “family wage”).

However, these countervailing factors have a limited effect according to Marx. The LTRPF holds even with an increased rate of surplus value as long there are natural limits to its expansion:

“As demonstrated in part 3 of this book, the rate of profit decreases in proportion to the mounting accumulation of capital and the correspondingly increasing productivity of social labour, which is expressed precisely in the relative and progressive decrease of the variable as compared to the constant portion of capital. To produce the same rate of profit after the constant capital set in motion by one labourer increases tenfold, the surplus labour-time would have to increase tenfold, and soon the total labour-time, and finally the entire 24 hours of a day, would not suffice, even if wholly appropriated by capital.”[3]

In Marxian terms there is a unity in the law of value, the laws of accumulation and the law of the tendency of the rate of profit to fall.[4] The reduction in the unit value of commodities, the social necessary labor time objectified in them, is performed by an increasing investment in means of production in absolute and relative – to labor force – terms that expands the productivity of labor while the value composition of capital, as the value expression of an increased technical composition, also expands. As a result of the relative decrease of living labor compared to dead labor implied in such development, the rate of profit falls in the long run.

Thus, the tendency of the rate of profit to fall is based on what the output-capital ratio (Y/K), or the maximum rate of profit, reflects, namely the inherent trend of capital to its relative over-accumulation (K/Y).

“A fall in the rate of profit and accelerated accumulation are different expressions of the same process only in so far as both reflect the development of productiveness. Accumulation, in turn, hastens the fall of the rate of profit, inasmuch as it implies concentration of labour on a large scale, and thus a higher composition of capital.”[5]

Considering that the distribution variables of the Penn World Tables are incomplete, with data for just few years in some cases, the present study wont deal with the evolution of the surplus value rate, or the profit/wage ratio in national accounts terms, during the period covered. Nonetheless there are several studies which established a stable pattern, considering the limited range of variations of the shares in the net output, with a smooth downward trend until the mid seventies and a smooth upward since then.[6]

However, this ratio has been far from reaching levels implied in many Marxian lectures which imagine a simple surplus value rate at extremely high levels without explaining the conditions for its realization in terms of social solvent demand.[7] Several particular studies have shown that the maximum rate of profit and the rate of profit had similar patterns in the long run – with indeed a larger decrease in the rate of profit due to a relative decrease in profits share -. [8]

The maximum rate of profit is the inverse of the value composition of capital, the ratio of GDP to fixed capital at current prices (cgdpe / ck), while as a proxy to unit value we define a daily productivity and then consider its inverse. Thus we divide GDP by the number of persons engaged multiplied by 250 worked days per person engaged. The labor time to produce 100 dollars at constant prices of 2005 measures for any economy how many working days – by person engaged – takes to produce a volume represented in those 100 dollars at constant prices. 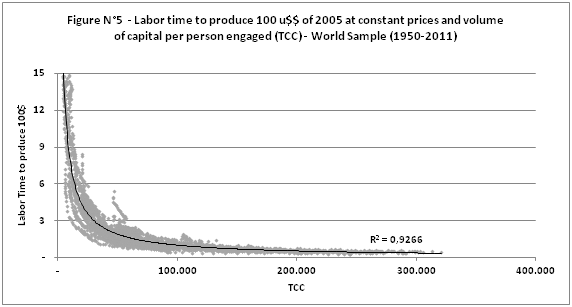 In Figures N°5 and N°6 we reflect the scatter plots showing the relation between value reduction, technical composition increases and minor profitability levels (which given the data implied in this study express higher value composition levels).

The fall in the output-capital ratio or the maximum rate of profit has shown different intensities depending on the particular region considered with a strong trend to convergence of all regions in similar levels from a postwar period of wider regional differences. In particular South America and Asia showed higher ratios which, since the second part of the nineties and the first years of the XXI century, disappeared. Asia as the most dynamic region in world capitalism showed larger accumulation rates that during the last two decades dropped profitability differentials. 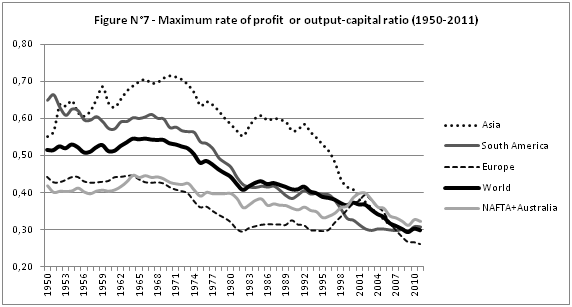 Nonetheless, generally in core countries the share of profits in net output is clearly lower compared to peripheral regions. Thus, despite this convergence in the maximum rate of profit or the output-capital ratio for the last decades, it may be argued that already exist profitability differentials between core and peripheral countries.[9]

According to the definition stated in this paper of the value composition of capital (K/Y), a process of convergence in the output-capital ratios would imply also a convergence in the value composition of capital. In consequence, it´s the surplus value rate, or the share of profits (P/Y), the main factor determining profitability differentials at international scale.

[2] “This mode of production produces a progressive relative decrease of the variable capital as compared to the constant capital, and consequently a continuously rising organic composition of the total capital. The immediate result of this is that the rate of surplus value, at the same, or even a rising, degree of labour exploitation, is represented by a continually falling general rate of profit” www.marxists.org/archive/marx/works/1894-c3/ch13.htm .

[4] “Since the development of the productiveness and the correspondingly higher composition of capital sets in motion an ever-increasing quantity of means of production through a constantly decreasing quantity of labour, every aliquot part of the total product i.e. every single commodity, or each particular lot of commodities in the total mass of products – absorbs less living labour, and also contains less materialised labour, both in the depreciation of the fixed capital applied and in the raw and auxiliary materials consumed. Hence every single commodity contains a smaller sum of labour materialised in means of production and of labour newly added during production. This causes the price of the individual commodity to fall. But the mass of profits contained in the individual commodities may nevertheless increase if the rate of the absolute or relative surplus value grows. The commodity contains less newly added labour, but its unpaid portion grows in relation to its paid portion. However, this is the case only within certain limits. With the absolute amount of living labour newly incorporated in individual commodities decreasing enormously as production develops, the absolute mass of unpaid labour contained in them will likewise decrease, however much it may have grown as compared to the paid portion.” www.marxists.org/archive/marx/works/1894-c3/ch13.htm.

[7] On this aspect, only the introduction of the turnover speed of circulating capital, including variable capital to labor force, allows a proper explanation of such trends. The traditional increase in surplus value rate has to be understood mostly as the increase in the annual surplus value rate rather than the simple rate. The simple surplus value rate could be in an initial situation of one annual circuit in which, for instance, profits and wage bill have similar shares (50-50). With the development of productivity that years later has reduced social necessary labor time, circulating capital performs five circuits in a year. As advanced capital its amount have fall from 50 to 10, while profits kept being 50. The annual surplus value rate is now 500% (50/10) and not 100% (50-50) as long as the simple surplus value rate remained stable. In terms of profitability just the variable advanced capital (10) counts. The successive annual circuits allow the capitalists to get more surplus value by and because reducing social necessary labor time to produce one commodity. Surplus value rate in any cycle (10/10) is equal to the simple surplus value rate (50/50). However the four additional circuits in the second case are, from the perspective of capitalists and their variable capital advanced, (10/0). This situation covers two aspects neglected in mostly any treatment of these issues: the reduction in the value of labor force as capital advanced, and the necessary role of the working class consumption as a main base of social solvent demand. A larger explanation of these aspects falls aside of the objectives of this paper.

[9] For a detailed comparison of rates of profit in core and peripheral countries, Maito (2015).